This place is for Closed bug reports only. NOT for asking help!

please report on bug report section and post out the erros.txt instead of that ugly photo.

i'm locking this out

Sorry for my bad English and for posting in wrong area, I am trying to learn how to use this forum yet.

Below the file error.txt, sorry for being compressed, but with this 3Mega in size.

I play in bRO. Use the same setup for my other BOT's, but with the homÃºnculo has the problem in figure below, the serverType moved, I tried the server from 0 to 21, but I do not know if the current problems by not rag Logged in any other, only in 21.

Information about the config:


I need help to solve this; I have no idea what you can do to fix this problem.

You are using old OpenKore. Please Update to latest SVN, or Enable and use AutoUpdater.
Join our Team. Click here.

Thanks for the help, but, I am noob and I have great difficulty with English, please, could explain how make the AutoUpdater?

The current SVN is the same as openkore? I download it in one of the sites below?

First: Use this mirror: http://openkore.collectskin.com/
Second: Addition Install this: Setup-Subversion-1.6.2

Then You can use AutoUpdater Feature. It will not show you what it is updating. But it's working

Not satisfied, then the file error.txt

Another question, how do you use the Potion Pitcher skill in homÃºnculo, before I used the config:

I bet this has something to do with like 1 of your 100000 plugins.
Try again with loadPlugins 0 in sys.txt
If it doesn't turn out to be the issue, then you might want to try the console interface cause wx might also be the cause.

Do this, and do it correctly and that will bring us closer to the solution.
One ST0 to rule them all? One PE viewer to find them!
One ST_kRO to bring them all and in the darkness bind them...

Tested for some time with loadPlugins 0 in sys.txt, but I didnâ€™t realize it works correctly, because I had problems with players and without macro I do not know how to play.

At least the plugin must use macros, please, where can I download:

Unfortunately I managed to leave my alchemist playing, because the bug occurs often in random times, sometimes occurs after 10 minutes, others after 1 hour.
Since nobody else said anything I can do, I will describe what I tried and had no success:
- Removed all my plugins, except the macro, I can not run without it Open;
- Download Site http://bibian.ath.cx/ the file Misc Plugins and I am using macro plugin version 2.0.2;
- Use the wxstart.exe (6.645k) date 24/07/2007;

Please, if anyone has any idea that can do more, tell me, because if you do not have to leave it AFK in client Rag normal.
Top

Your bug report is too vague. The bug can be anywhere in kore or in the plugins.

From looking at the bug reports it seems that it has something to do with picking up items.
Or possibly the actorList for items is getting corrupted.
But those are already a wild guesses.

Next post better be more specific and to the point or this topic will be locked.
And put a .txt in the attachment next time.
One ST0 to rule them all? One PE viewer to find them!
One ST_kRO to bring them all and in the darkness bind them...

I apologize for being so vague, we know very little about computers and in this case I have no idea what might be happening.
Try to answer your questions tonight and test some changes that you said and post the results quoted.

Question: What is the server you play on and what is your configuration?
Answer: I play bRO, below the configuration servers.txt:

Question: Have you updated recvpackets.txt?
Answer: I do not know when the recvpackets.txt I'm using, but I will update you on tonight and then post here.

Question: Does the bug also occur when you are AFK in a town?
Answer: Not tested yet, test and then post results.

Question: Does your bot even move?
Answer: Yes, use macros for him to stop and walk from time to time.

Question: Does this bug occur when using start.exe instead of wxstart.exe?
Answer: Not tested yet, test and then post results.

Question: Does this bug occur with the character with the homunculus?
Answer: This occurs only with the Alchemist, use it for other bots Kore (Rouge, Monkey, BS) and this error never occurred.

- Playing with recvpackets.txt updated, the bug occurred after approximately 40 minutes;
- Change the pickupitems.txt, leaving "all 0" and indicating to catch all the letters, and 11 more items, the bug occurred, I do not know how long after;
- Change the pickupitems.txt again, leaving "all 0" and removed all the others, was playing for about a 2:30 min and was not the Bug, but I will put you play again today and see if the bug does not occur after more some time. 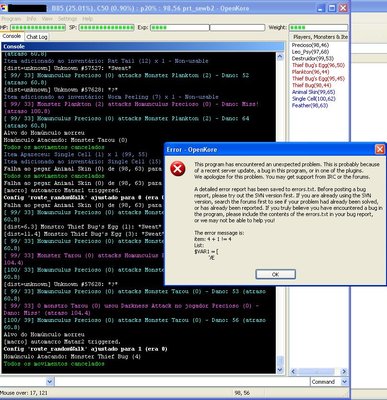